Kaysersberg, a village on the Alsace Wine Route Kaysersberg is one of my favorite villages in Alsace. Located on the Wine Route, it is not far from Colmar and has mad charm during the Christmas market, but also all year round. I actually prefer it outside of Christmas time, during spring or summer, when everything is in bloom.

A short history of Kaysersberg

According to the tradition, the Romans established there a military camp. However, Kaysersberg had then no inhabitants and was mentioned for the first time in 1227. The Holy Roman Emperor decided to build an imposing fortress, thus leading the village to a long period of prosperity. The Thirty Years War would then ruin the town, which only managed to rebuild and repopulate little by little up until the French Revolution, a period during which the town would have the name of Mont-Libre. Liberated in 1944, the town was damaged during World war II. Kaysersberg is the birthplace of Albert Schweitzer, 1952 Nobel Peace Prize. His house has now been converted into a museum.

What to do and what to visit in Kaysersberg?

I highly recommend you to go there during your stay or weekend in Alsace. You will find a very cute flowered village surrounded by vineyards, with colorful half-timbered houses, a cute little river (Weiss) and castle ruins. The village centre is pedestrian and it’s a pleasure to walk around. Kaysersberg is not very big, but it’s very pleasant to take your time to stroll around!

A must-do: climbing up to the castle. From the centre, it is easy to climb to the top of Kaysersberg castle, or Schlossberg, the imperial castle built between the 13th and 15thcentury and located on the heights of the village. The climb takes about 10 minutes and leads up to a beautiful view onto the village, the valley of Kaysersberg and the vineyards.

When you will visit Kaysersberg, I recommend you to go inside the Church of Invention-de-la-Sainte-Croix of Kaysersberg – that was finished in the 15th century -, in the countless chapels, the former Fransiscan convent, in the Croix de cimetière de Kaysersberg or even in Aslpach Priory. The Town Hall, the fortified bridge, the Tour de la Porte Haute and the Clos des Capucins could also be of interest.

During your visit, have a look at the pretty traditional Alsatian houses, such as the former public slaughterhouse, the former bathhouse or the Herzer House, all dating back from the 13th to the 18th century.

And as usual while visiting a village in Alsace, don’t forget to go for a tour of the vineyards and wine cellars!

With illuminations and decorations, Kaysersberg transforms itself every year at Christmas, showing off quite a different atmosphere. The village is full of charm during the Holiday season, so don’t forget to visit Kaysersberg Christmas Market during your stay in Alsace in December.

My best addresses in Kaysersberg

My pictures of Kaysersberg

You will find here the program of guided tours organized by the Tourist Office of the Valley of Kaysersberg.

You will find parking areas at the village entrance. It costs 2€ for one day.

Have a look on Vialsace to plan your itinerary to come here. 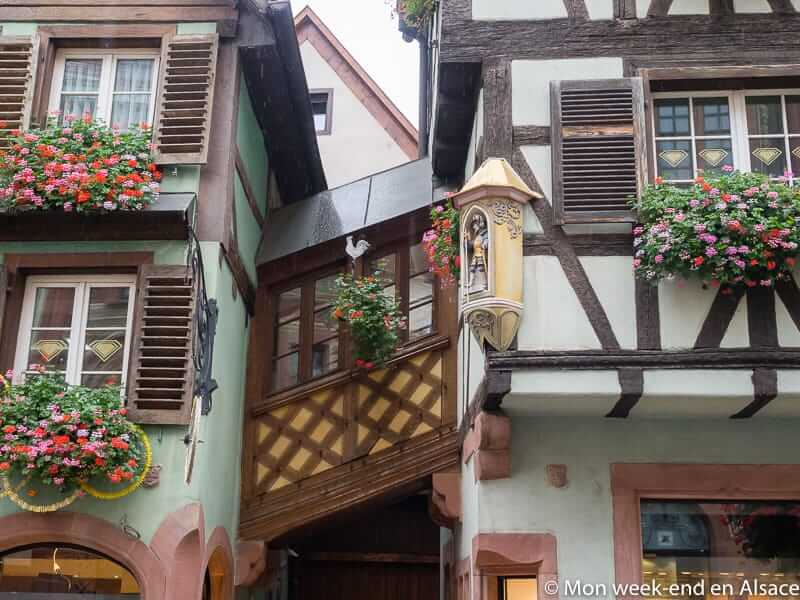 A boat trip in Strasbourg with Batorama